Two MAP members, Harvey Cappel and Larry Watts, will be the featured speakers at the November 13, 2014, Local Authors Hour at Helen Hall Library. The presentations will begin at 10:15am in the library auditorium. 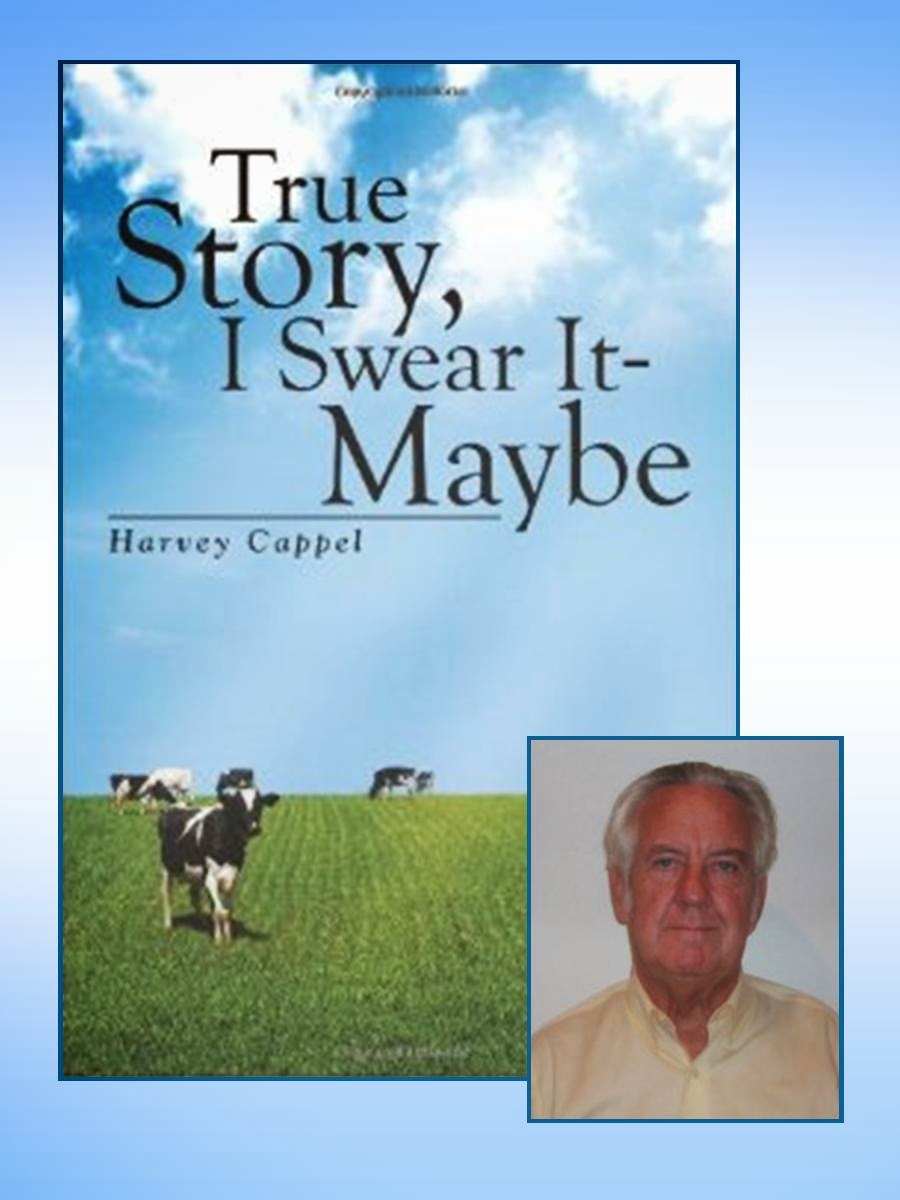 Harvey, a semi-retired mechanical engineer, is the author of True Story, I Swear It—Maybe, a collection of humorous short stories about life’s epiphanies, man’s antics and a life well-lived. His writing career includes being a local newspaper guest columnist and small newspaper owner. 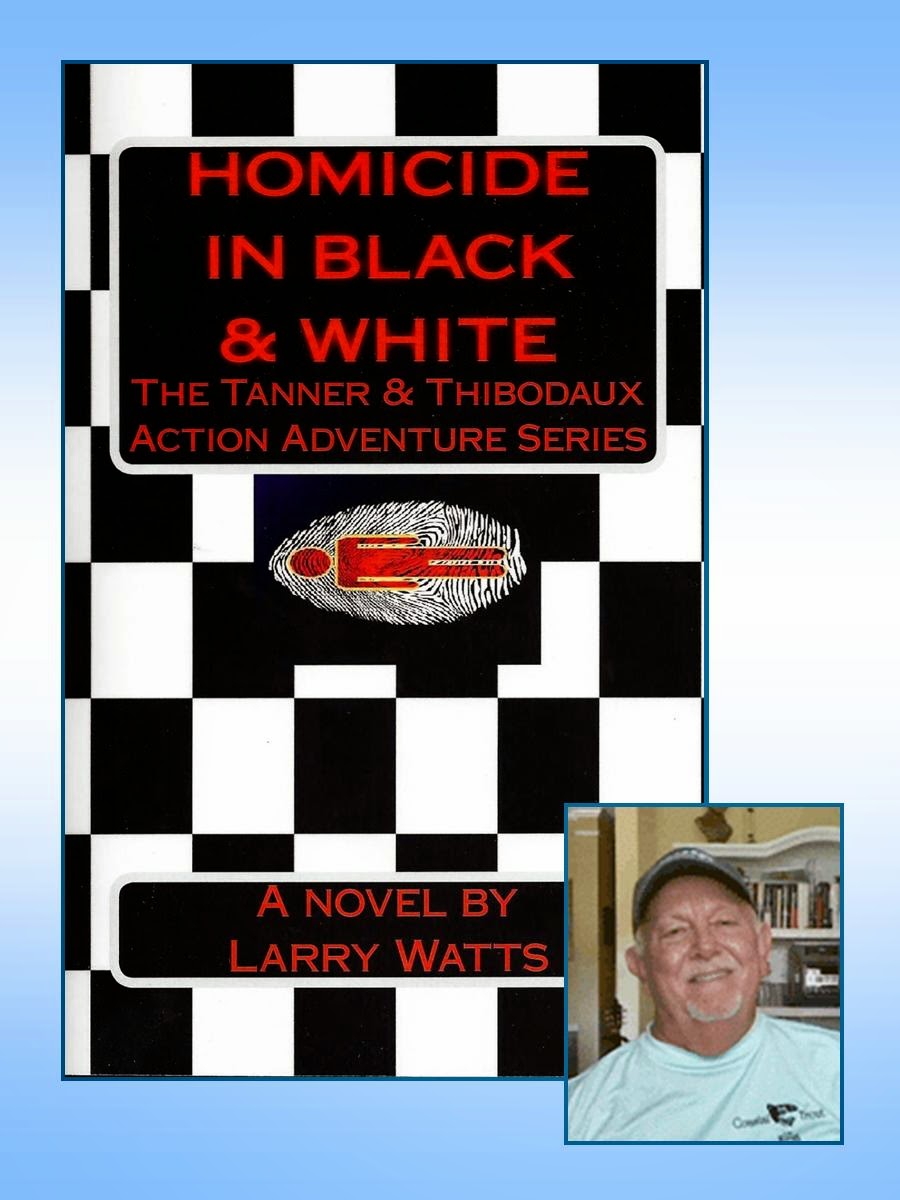 Larry is a retired police officer who writes novels and short stories about crime and social justice. He is the author of Right, Wrong & Rationalizing Truth, Cheating Justice, a collection of short stories titled, The Park Place Rangers, and a new novel series about two detectives, including Homicide in Black & White and Rich Man, Dead Man.
Don’t miss this month’s “two for one” Local Authors Hour presentation.
Posted by Gloria Hander Lyons 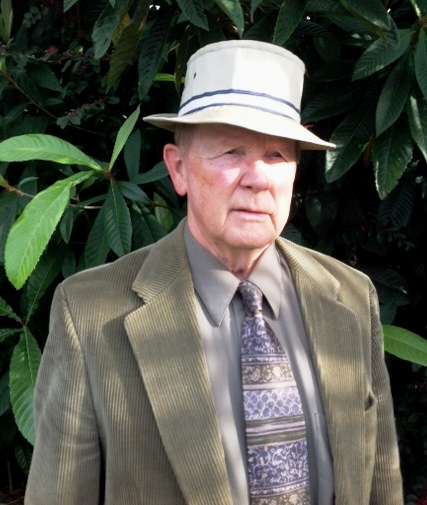 MAP Group member, Harold Raley, author of Louisiana Rogue, will be the featured speaker on Thursday, October 2, at 10:15am for the Local Authors Hour at Helen Hall Library in League City.
Mr. Raley has written 14 books on philosophy, history, theology, language, literature, and fiction, plus numerous articles, book chapters, and reviews. Most of his writing is in English, but he also writes in Spanish and French. He has taught courses at several universities. 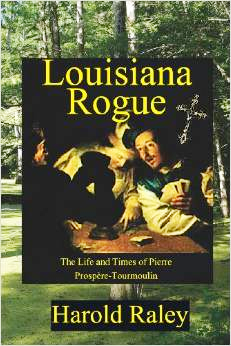 His novel, Louisiana Rogue, is about a marginalized, mixed-race, trilingual con artist from Louisiana back in the 1830s. He schemes and scams his way across frontier America, the Spanish Southwest, Texas, and parts of Mexico in search of fortune and social acceptance—and one step ahead of the authorities. The latter part of his narrative is his search for a lost love he cannot forget.
Join us for this entertaining presentation by Harold Raley, a talented and prolific author.
Posted by Gloria Hander Lyons 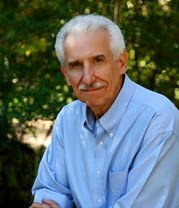 Marketing and Publishing Group member, Tom Rizzo, will be the featured speaker at the Local Authors Hour on Thursday, September 11, 2014, at 10:15am at Helen Hall Library in League City. 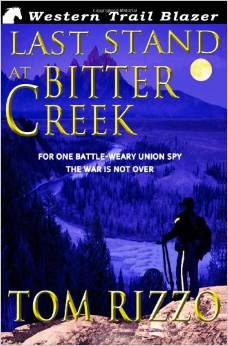 Tom is the author of Last Stand At Bitter Creek, a historical action-adventure novel, named Finalist for the 2013 Western Fictioneers Peacemaker Award, Best Western First Novel. He also writes short stories, as well as nonfiction. His book, Heroes & Rogues, includes mini-profiles of several characters, bad and good, who roamed the American frontier.
Tom began his career as a teenager, doing odd jobs at a small radio station in Ohio, and soon was promoted to disc jockey. He also wrote news, sports, music intros, obituaries, commercials, and more. He later wrote news for radio and television, spent several years with the Associated Press, and worked as a freelance writer for magazines and advertising, as well as doing promotional writing for businesses.
Along the way, he met a colorful cast of characters who helped inspire his story-writing, including the one for his first novel. He is now working on his second novel, The Deadly Gray Dawn.
Please join us for this entertaining program by talented local author, Tom Rizzo.
Posted by Gloria Hander Lyons

MAP Group member, Tom Rizzo, author of Last Stand at Bitter Creek, will lead the discussion for our next meeting on Thursday, June 12, at 11:45am in the Board Room at Helen Hall Library. Our topic is an article titled, “Five Mistakes Killing Self-Published Authors” by Kristin Lamb.

You can read the article on this link: http://warriorwriters.wordpress.com/2013/12/26/five-mistakes-killing-self-published-authors/


Mistake #1 Publishing Before We Are Ready


Mistake #3 Believing that, “If We Write it They Will Come”


Mistake #5 Shopping One Book to DEATH


Our group talked about points #1 and #2 at previous meetings, and will continue discussing the remaining points in June.
Please join us for this valuable exchange of information. Our goal is to share our marketing experience to help all our members achieve book publishing success.
Posted by Gloria Hander Lyons 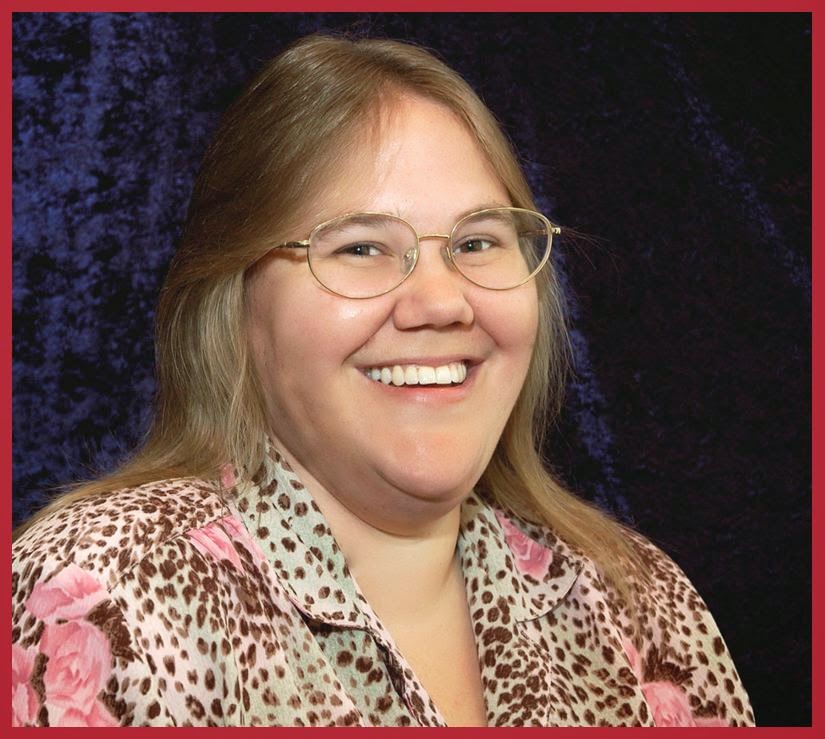 Caris Brown, the Local History Librarian for Helen Hall Library, will be the guest speaker at our meeting on Thursday, April 10, at 11:45am. She will teach us about research methods and resources for gathering data from historical sources that can be helpful for our members in writing both fiction and nonfiction books.
She will begin by discussing library databases and how they can be used for research. In addition, she will go over the content and usefulness of city, state, and federal archives as well as a few other archival repositories. Our MAP Group members might find it helpful to look over the databases found on the Helen Hall Library website before attending the meeting. Just go the library website and click on the e-library tab found at the top of the page. Next, select library databases by subject and you will be taken to the page with a list of all library databases. Check them out!

Ms. Brown received a Master of Information Science (M.I.S.) degree from the University of Texas in 2002. Upon graduation she worked for History Associates Incorporated, a company in the Washington D.C. area that provides historians and archivists on a contract basis. She worked for the National Institutes of Health, the Library of Congress Map Division, the Smithsonian Anacostia Museum, and Independence National Historical Park among many other organizations. In 2008, Ms. Brown became the Local History Librarian for Helen Hall Library and manages the archival collection.
Please join us for this informative presentation.
Posted by Gloria Hander Lyons Bob Arnold, author of First in Texas, will be the featured guest for the April 10 Local Authors Hour, starting at 10:15am at Helen Hall Library.
His book chronicles the lives of three men who made significant contributions to more than one hundred and fifty years of Texas history.
In 1821, Josiah Bell and his wife crossed the Sabine River into Texas as penniless squatters. They settled in Austin Colony on the upper Texas coast where Bell was often left in charge of the colony’s affairs during Stephen F. Austin’s negotiations with Mexican officials. Bell built a river landing on the Brazos River that became a supply depot for settlements near the river and a major trading port for goods coming into and out of Texas. He was a respected leader within the colony, a successful entrepreneur and businessman, and the founder of two towns, one of which was briefly the capitol of the Republic of Texas.
Josiah Bell’s third son, James Hall Bell, was educated at Harvard Law School and became the first native-born Texan to serve as a justice on the Texas Supreme Court. Judge Bell was an outspoken opponent of secession as well as a staunch defender of citizens’ rights against the undue powers of government, often taking political stances that resulted in disfavor with his friends and colleagues. After the Civil War, he was instrumental in bringing the Republican Party to Texas and was an important Texas politician for many years.
Red Arnold was raised in Longview, Texas, and enlisted in the Marine Corps following high school graduation. After his Marine service, he became a Texas Highway Patrolman and married the great-granddaughter of Judge James Hall Bell. When World War II began, he reentered the Marines and fought in several Pacific island battles. At the conclusion of the war, he returned to Texas as a wounded veteran to restart his law enforcement career, ultimately serving nearly twenty-five years as a Texas Ranger. Known as the “law in Northeast Texas,” Red was often involved in deadly encounters with hardened criminals, strikebreakers, and petty criminals as well as with election fraud, robbery, murder, and other crimes. 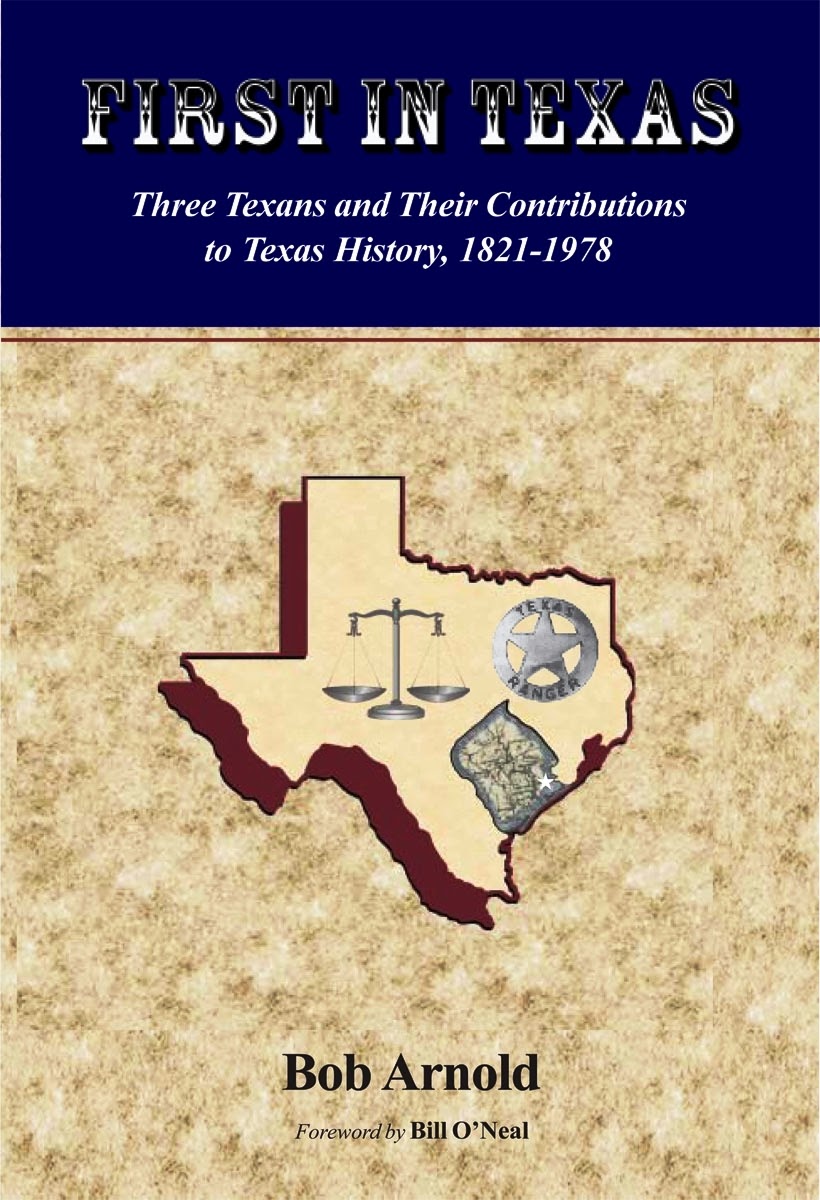 Bob Arnold graduated from Texas Tech and served as a Signal Corps officer in the United States Army. Following his military service, Bob was employed by Union Carbide Corporation as a polymer chemist and had a thirty-five-year career in various roles within the laboratory, manufacturing, and business organizations of Union Carbide and Dow Chemical. He and his wife, Bejie, reside in Friendswood, Texas, and have two children and two grandchildren.
Please join us to learn more about these memorable and entertaining facts about Texas history.
Posted by Gloria Hander Lyons 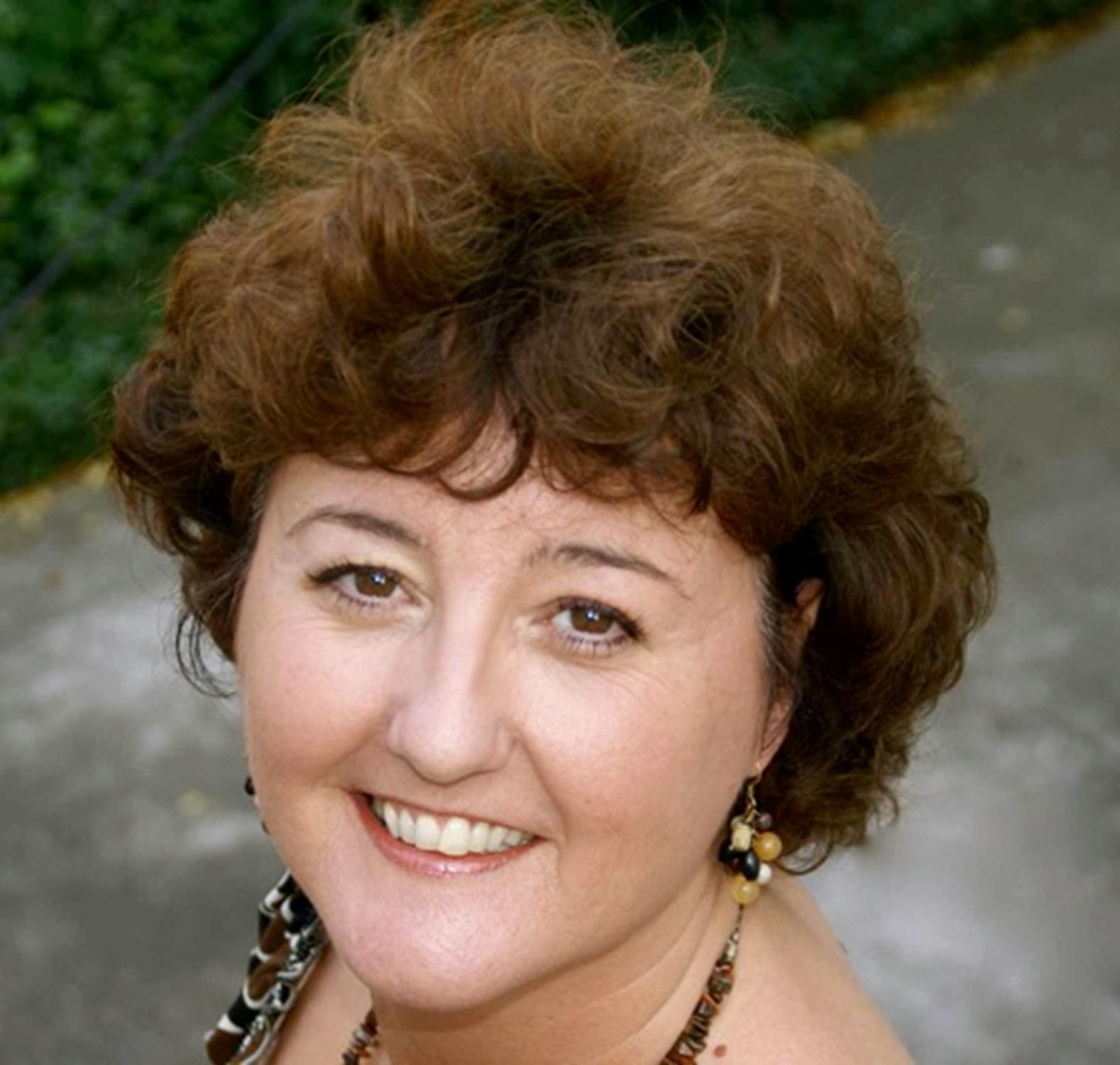 The guest speaker for the March 13, 2014 MAP Group meeting was Pearl Hewitt. She is an award winning voice actor who was born in England, and moved to Houston in 2001. In 2007, at the suggestion of her 12-year-old son, she began training as an audio book narrator.

Renowned for her distinctive, smooth and flawless voice, her versatile vocal talents have been used in projects ranging from a simple voicemail to multiple, quirky character voices in video-games and audio books. She works as a freelance narrator from home, recording in a state-of-the-art sound booth located in what was previously her formal dining room.
Pearl encourages authors to broaden their fan base by offering their titles in an alternative format. Buyers can listen to audio books using computers, e-tablets or smart phones, and the cost for creating the books has dropped drastically over the past few years. Experienced book narrators charge between $200 and $400 per finished hour of book content.
You can learn more about audio book narration and how to produce an audio version of your book on two websites: The Audiobook Publishers Association at: http://audiopub.org, and ACX (Audiobook Creation Exchange) at: http://acx.com.
Below are a few interesting articles which she suggests for more information about audio books:


Author Grace Burrows discusses her audiobook process
http://www.usatoday.com/story/happyeverafter/2014/03/03/grace-burrowes-self-produced-audio-books/5951523/
T.M. Lurhman- NY Times- Audiobooks and the return of storytelling
http://www.nytimes.com/2014/02/23/opinion/sunday/luhrmann-audiobooks-and-the-return-of-storytelling.html?smid=fb-share&_r=1
Alexandra Alter-Wall Street Journal-The New Explosion In Audiobooks
http://online.wsj.com/news/articles/SB10001424127887323854904578637850049098298
Pearl says, “I'm very excited to share audio book production opportunities with those who have not even considered it before. The industry is exploding and apparently sales of audio books sky-rocketed in the past couple of years. It's a great time to become involved and there are many narrators out there looking for a new book to narrate.”
Visit her website: www.pearlhewitt.com to learn more about her services.
Posted by Gloria Hander Lyons